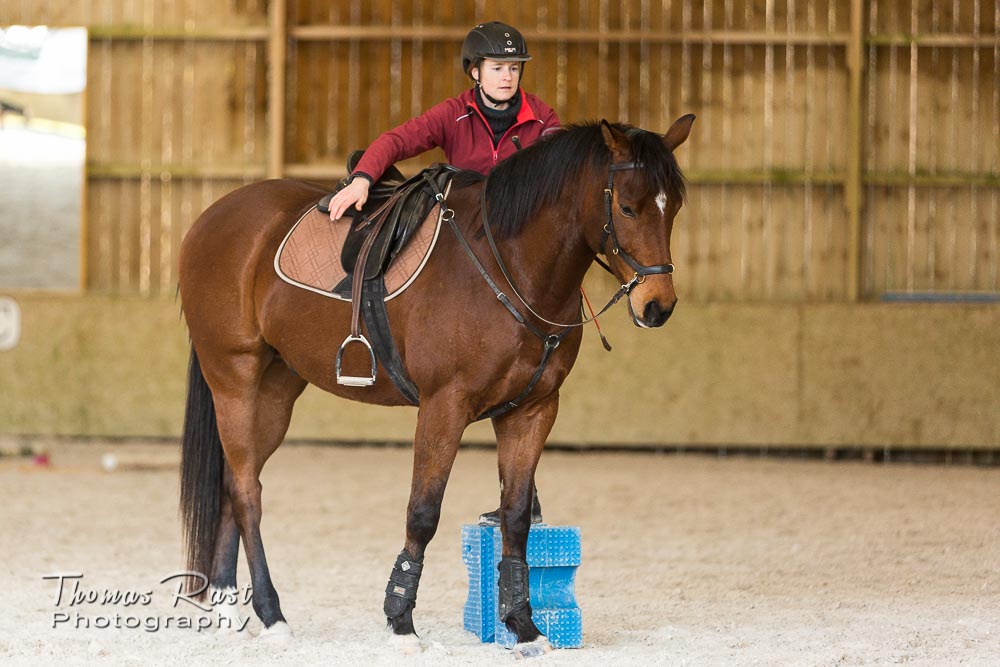 Zayin had a hard time this week. We started with an exceptionally good session on Monday, but the next day was very bad, he had huge issues already when grooming. So I decided that it was time to have him checked by a Vet. Sometimes physical pain has a big influence on the emotions of a horse.

He was calm and connected on Monday, doing a very good job and I could advance with the long reins, now letting them run over his HQ, just above the tail. He did a great job accepting and understanding it.

On Tuesday morning, however, he already acted funny when I went to get him from his box. He was just a little hard to catch. He couldn’t stand still as well while grooming and he hated to be touched and brushed all along his flanks. He was super touchy all over his body.

Something in me, maybe my intuition, told me that he needs some retreat from emotionally difficult work for him, but I didn’t listen to it. So I resumed with the normal daily routine, wrongly expecting it to go well. The session was simply bad; he was emotional, spooky, although there were no disturbances at all from the outside.

I eventually did manage to calm him down and end the session on a good note, walking him in the long reins around the arena. But it made me seriously question a few things.

Why does a horse not do the things the way I expect it?

There are 3 main reasons why a horse doesn’t act the way we expect:

I know Zayin has physical issues. Often horses show physical issues due to being emotional or due to lack of understanding. During the first 3 weeks, I wanted to learn to know him and see how far I manage to resolve this tension and panicky nature with psychology and the use of clear patterns and progressive gymnastical work.

I think I came pretty far, but that he stayed this touchy and sensitive with the cinch tells me that there is more behind than simply a sensitive horse with maybe some bad experience.

It was time to call the Vet

So I called the owner and asked her consent to contact the vet. She was ok, so our vet, Dr Levy, who came anyway the next day, had a look at Zayin. I told her that I had a suspicion on gastric ulcers, because of the combination of his symptoms: yawning, being super sensitive in the girth area, sometimes aggressive behaviour to other horses and kicking up to his belly with his front feet.

The outcome is that Zayin has too long ligaments at his knees (hindquarters) which cause the patella to move too much. This doesn’t only hurt, but it also destabilizes the hind legs causing the horse to be worried all the time because he doesn’t feel fit enough for flight if necessary.

This instability causes the horse to tighten all the muscle of the shoulder area – this is where his sensitivity to the girth comes from. The vet showed me that his chest muscles, which run directly beneath the cinch, are even slightly swollen and very sensitive. She agreed with me that he probably has some ulcer as well, but this is a result of his constant stress and emotion due to his problems in the hindquarters.

So the plan for him is now that he will get treatment in 10 days. Until then I have to get him to a point where he is safely rideable because as soon as he gets his treatment he has to trot every day very actively in order to stimulate the ligaments and muscles of the knee to tighten. He can’t do this kind of work online; he has to do it on straight lines to make sure he is evenly pushing with both hind legs.

It is a very short window just after the treatment where his movement pattern can be changed – re-educated. He as well got a supplement prescribed to soothe his stomach. 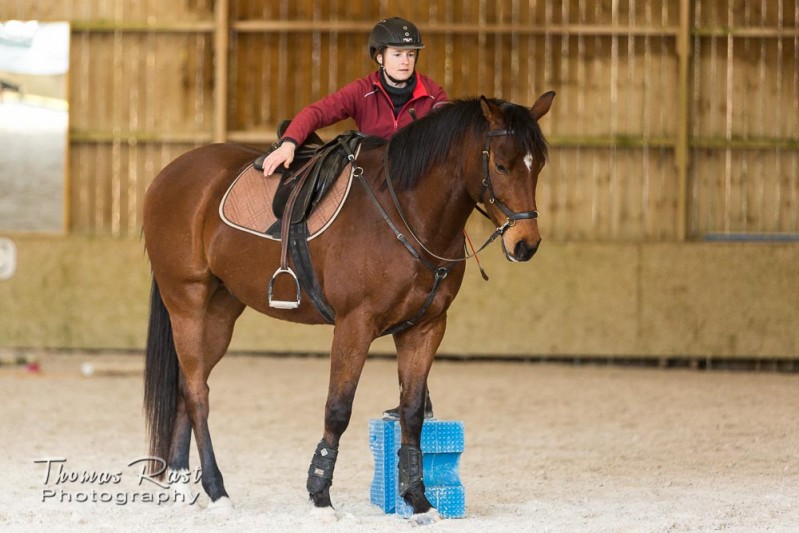 He is doing a very good job at the mounting block. Focused and calm.

Annika and Hidalgo are playing good Uncle. This gives a young or unexperienced horse a lot of security.

I am riding him with the Micklem Mutli Bridle and with contact on the reins - this will give him more the feeling of holding hands. It is a bit like a shorter phone line.

This picture is from our third ride. He started to be pretty confident and happy about it.

Good boy. Had better stiring and started to get some conversation about stoping going.

The day after the visit of the vet, I already rode him for a few minutes. At first, he made some drama at the mounting block, but suddenly he seemed to remember and placed himself perfectly for me to mount. He was a bit anxious at first to walk off, but soon he settled into a nice walk. He was ridden already, but it is about 1,5 years ago and it was very little rides.