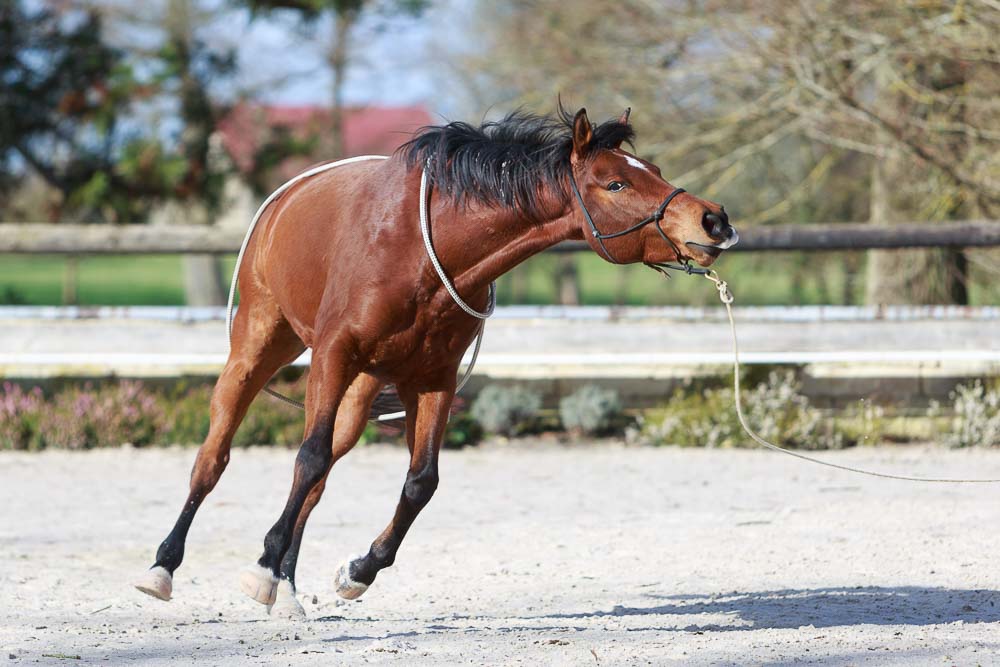 Zayin and I are starting to become friends. He made big progress in giving me his trust that he could achieve everything I ask of him. I started to address his issues with the cinch and his emotional baggage connected to it by using the Figure 8 rope. This at the same time, helped his physical relaxation and balance.

During this week I had 5 complete sessions with Zayin. He is improving a lot in the Quality of connection he is giving and the trust he starts to put into me. There are moments where I start to feel a very nice and gentle horse looking for a safe connection.

On Monday and Tuesday, I took both horses at the same time into the indoor arena and allowed them some controlled trotting and cantering around the arena with changes of direction at liberty before the actual work. Due to Tadjik being there, I had the opportunity to work more on Zayins trouble with the cinch and being saddled.

He was moving away a lot as soon as I would approach his side, even when I was just holding a rope in my hand. I simply moved with him until he would stop and look at the rope in my hand. After a few repetitions he would start to look back to me each time I would do something on his side like touching, saddling, or cinching. This tells me that he starts to involve into the process mentally, tries to understand. He was more ok with everything from that moment on.

I noticed that all cinches slide back on him, towards the flank area, which will cause him more discomfort and trigger his defence – mechanisms. So I decided to play with the figure 8 rope. For this, I simply take a 7 m ring rope and wrap it in a figure of 8 around his neck and hindquarters. I used this technique already successfully on several horses with confidence issues and cinching issues. It is less confronting than the flank rope and for Zayin is serves 2 purposes:

Zayins reaction was interesting to observe. He did not start to buck or kick in a complete right brain fear attack. He was walking and trotting several laps pretty calm before he started to kick up, but more like being annoyed by a horsefly. Only when there was lots of distraction from the outside, he would buck harder.

I gave him lots of mini breaks in between, even when there was no total acceptance or relaxation, just to assure him that he is doing great and that everything is ok. This helped him a lot. In the end of the first session, he was able to pick up right and left canter without being emotional about it. The second good effect was, that he was using his hindquarters a lot more straight and he was carrying himself in a better balance.

I had 1 session with him in the outside arena with the figure 8 rope. There was a lot of distraction going on, cars driving by, ponies moving past the arena, horses running around in the field next to it and people coming and going. This seemed to be too much for his “RAM” and he had to buck a lot more with the rope. In the end, it was a very good session though because it gave me the opportunity to work on his ability to calm down and relax after being emotional.

He ended the session being able to canter relaxed and connected and trot his cavalettis with a nice stretch.

The pictures of the second week 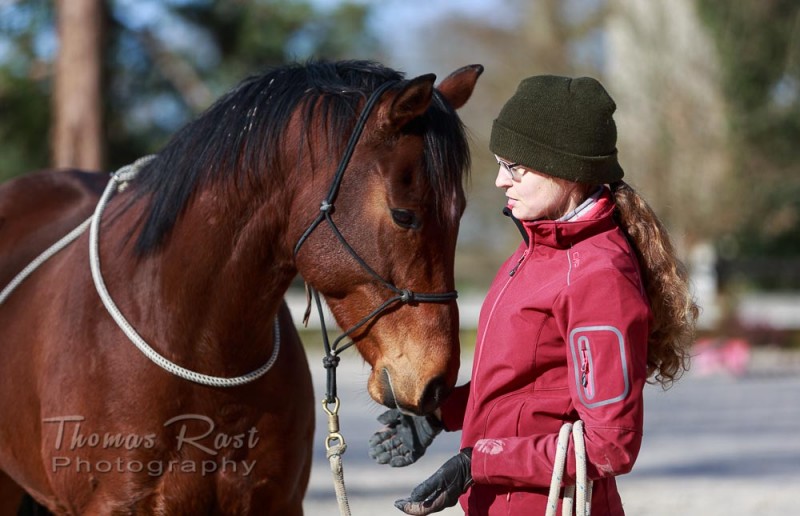 Starting the session, I just put on the Figure 8 Rope.

Here he is still quiet and nicely trotting over the cavaletti

Good boy - he likes close contact, it seems to give him security. Of course I don`t allow him to push on me.

A few things distracted him and caused him go really emotional - it was too much for his emotional fitness. He has a hard time dealing with more than one or two impressions at once.

He found back to connection and relaxation at the trot....

And even at the canter - the relaxation is still to be improved, but he managed to canter and accepting the rope around his body.

One more check if he can canter without bucking and kicking and with good connection to me.

Yawning is usually a sign that the horses is letting go of adrenalin. Most of the time horses will be calm and connected afterwards.

On Friday I progressed to a new outfit for him: A lunging cinch combined with a breast collar and a rope around his hindquarters. So now he had on top of the figure 8 rope also the cinch to deal with. I checked what he would say to jump obstacles in this outfit. I prepared him well with first trotting the cavalettis to get him used to the movement of all the ropes.

Then I built up a little jump with a pole in front to help him with the rhythm – and asked him first at the trot. He rushed the first one but didn’t buck or kick afterwards. Lots of rewards again to make sure he feels successful, even if it wasn’t perfect. After a few repetitions, he could jump both directions at the canter, with relaxation and continue the canter afterwards and jump again.

He had a proud look on his face and I could tell that he was fully involved mentally and emotionally.

On the side I keep little mental checkpoints to keep track on his emotional progress:

I am not expecting him to not spook, not get emotional or not rub his head on me. I just keep track of everything to look for little improvements. This is what counts. That he is less long emotional, connects sooner, rubs less hard, moves his feet just a little less when grooming.

If I would try to keep him from going emotional, he wouldn’t have the opportunity to learn how to calm down again and to come to the human to look for safety. What I wish for is, that whenever he feels worried about something, he checks in with me to see what I think about it and then trust my judgment.