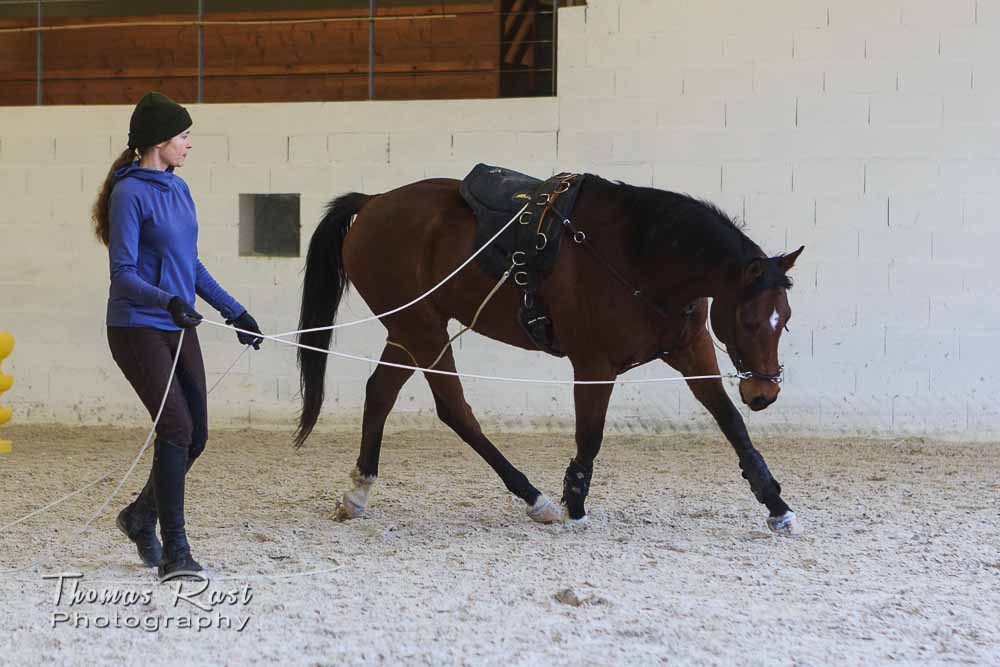 was very happy with Zayin this week. I start to get the feeling that we are heading in the good direction. The Figure 8 rope was a very good idea for him. It prepared him well for the next step: Long reins.

For Zayin I follow every single day the same routine. As he is a very insecure horse, he needs lots of consistency so he knows what will happen when – this will help him feel safer. I take him every morning as my first horse, bring him in the grooming corner for his daily grooming.

Since this week he actually manages to keep his feet still. I pick his feet and put on his leg protection – there he still has to move around a bit. Then I tie him and go to get the saddle pad, the lunging cinch, the breastplate, ropes and the cavesson. I untie him for the tacking up part. There he still needs to move his feet quite a bit. I allow him to move because I know it is simply a symptom of his discomfort of being cinched.

He feels bad about it already, so I won’t add any discomfort or blame from my side. I just make sure that I am careful and gentle with him, but also that I keep everything in a safe frame.

Once in the arena, I start with 10 minutes of quiet walking exercises. I find this an important point for any horse, not just to warm up the horse after standing in a box, but also to start a habit of relaxation and calmness when entering the arena. So many horses enter the arena and immediately want to trot or get excited.

During these 10 mins I ask easy little sideways yields on a circle – just a little outward drift in order to have him bed a bit and get more supple in his shoulders and ribcage. Then I attach the little rope around his hindquarters. I check if he can accept it at the walk, then I ask him to trot quietly on a cloverleaf pattern.

During the first 3 sessions this week he still showed some defensive reactions on the rope around his HQ. It usually happened when I ask him to go on the circle – he hesitates and starts to make funny little jumps with his but. During the last 2 sessions, I had no reaction at all!

He still loves his cavaletti work. He does a bit of it every day, and I combine it with trot walk transitions and changes of direction. Like this, I keep it interesting and I can keep working on his balance and coordination. His trot has become very regular and relaxed, he is tracking up nicely and starts to show some more suppleness of his back.

Don’t expect him not to spook!

Most days he would have a few proper spooks somewhere during the session. One day he could see the green ball in the mirror and it made him quite crazy. Then it might be two birds under the rail or some noise outside.

He usually shoots off at the canter, giving a buck and a kick and then trots with the tail more or less in the air. I don’t expect him to not spook – this is not my goal for him. It would be unrealistic.

He is a very sensitive, alert and spooky guy, he will always spook and let us know that there was something in the bush. The question is, how well can he deal with it, does he check for my opinion and does he allow me to help him?

During this week I noticed a big change – he started to come running to me after his spooks. He would come to stand very close and he managed to let go of his fear faster and faster.

The last two sessions he even managed to calm himself down while staying on the circle at the trot!

The pictures of the third week 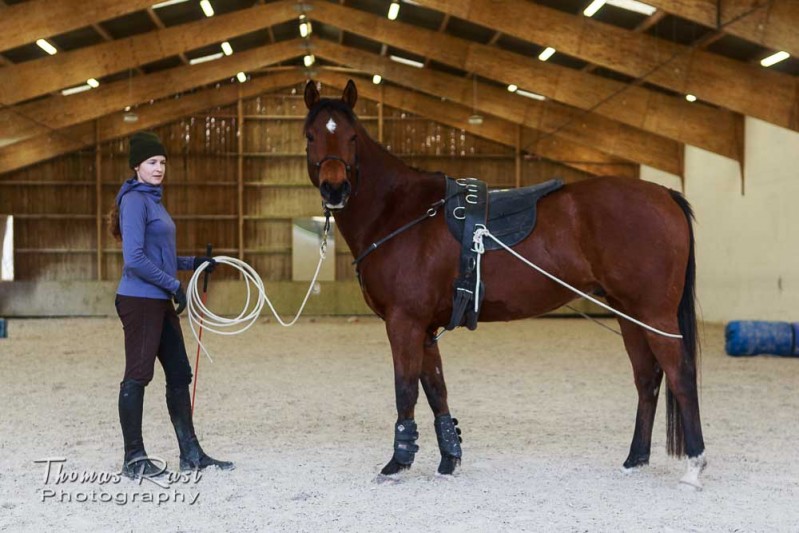 Zayins outfit. A lunging cinch with pad, combined with a breast place and a thin rope going around his hindquaters.

One of his spooks during work ...

His reaction now is to come to me to look for safety.

Canter departures are still a big potential for emotions.

Once a week I have him do jumping gymnastics. In the long run it will help to improve his canter.

He really likes it!

His style is to be improved, but the fact that he can canter nicely afterwards is very rewarding!

Friendly game with the line over his back.

Here he is still working on a pretty close range circle. I make sure to walk a lot with him, in order to keep the circle large enough.

Friendly game on the right side. Always a little bit more challenging.

Good boy! He starts to understand what to do with all the lines and how to carry himself.

He starts to get it. Nice forward down stretch with engaged hindquaters. Long reins are a great tool to help a horse with finding a healthier posture.

Every week I introduce 1 new exercise for him: This week: Long reins

I chose to start him on long reins out of several reasons:

I thought I had him well prepared through the figure 8 rope and the lunging cinch, so I made the mistake to immediately let the outside line go around his hindquarters. What a big difference a small change can make to a horse! He didn´t like it at all! He panicked as he felt trapped by the line around his but.

Luckily I was prepared for an eventual strong reaction and could control him pretty well in order to avoid real drama. So I started new and broke the exercise down into more little steps. I let the outside line run over his back, just behind the cinch. This was still scary enough for him, my guess was that it reminded him of the visual of the flank rope.

He trotted around me, not crazy but worried enough that he couldn’t walk. I made sure that I had a good contact on the other line in order to keep his nose on track and played a very gentle friendly game with the other rope that was over his back. It didn’t take long until he decided that it wasn’t that terrible after all and that he could trust my new tools and games. After this first session, he was able to accept the two lines wiggling and moving while walking relaxed.

The next 4 sessions with the long reins went better and better. By the end of the week, he could do walk and trot transitions on an accurate circle, following my energy. He started to carry himself in a very nice frame, accepting the contact of the lines nicely.

Friday was jumping day, which he did again in his whole gear of cinch, breastplate and rope around the but. Zayin was fantastic, relaxed and happy about it. I had built up an easy combination with one stride between the jumps. He really surprised me that day, as he was so calm, connected and happy! He actually looked rideable!

Let's see what the next week brings.