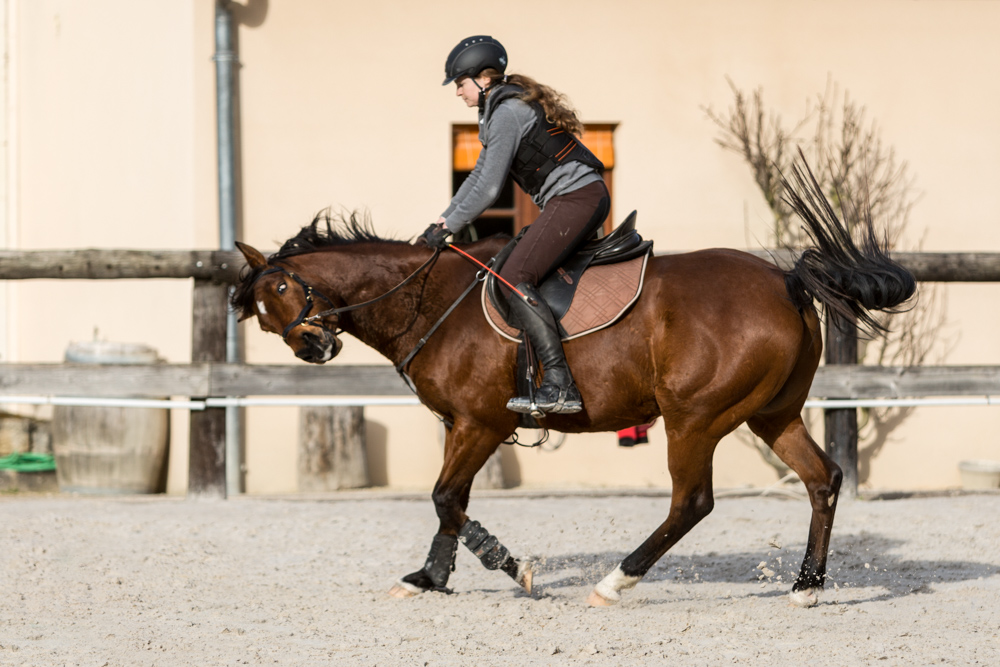 After the vet saw him in week 4, I started to ride him every day. I have to admit also quite exciting to ride a horse that doesn’t support being touched by the legs or on the nose. Due to his really sensitive muscle on his side, he reacts with tail swishing or in worst case bucking and kicking when he feels my leg.

When I do more on his nose than just keeping very gentle contact, he reacts with rolling up his neck, diving, head throwing and worst case also bucking.

He is really fine with the mounting. He knows what it is about, puts himself into place and waits patiently for me to get on. Trouble is only ahead if I have to stir him, stop him, slow him down or prevent worst-case scenarios when spooking. I asked every day one of the Working Students to ride ahead with a calm and experienced horse.

The first two sessions all Zayin could think of was biting into the other horses but and reacting emotionally when I tried to keep him from it.

Then I started to focus on him following my energy better, in order to have something like a stop or at least slow down. As he reacted so emotional on any action of the reins – especially lateral flexion – I could not really use it and had to find a way to communicate about energy.

My guess for his emotional reaction on the lateral flexion is this: As he bends his neck around, he will disengage his HQ causing discomfort in his knees. Sometimes I can even hear it snap really loud when crossing the hind legs. So I tried to avoid that one as much as possible and only use it for saving our lives.

Slowly we started to trot behind the good uncle horse, which was at first a bit exciting but soon he got really good at it – except the occasional super spook out of the blue. After about 10 rides he started to relax more and more into the contact of the reins and see them less as a restriction but more like a helping hand. 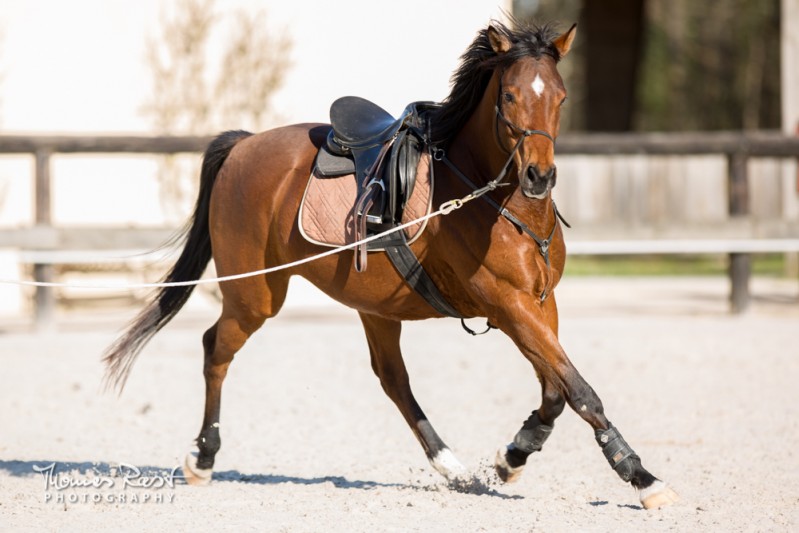 Calm, connected and responsive before riding!

Must have been a lion after all! His specialty was to buck out of the blue without warning or visible reason.... also the reason for my high security gear....

He quite often also found "the nice place"! Finding rhythme and relaxation at the trot.

He felt good and happy when he was trotting like this.

On the 9.3. Zayin finally had his treatment for his knee ligaments. No day off, he had to work immediately the next day – in the outdoor arena and with lots of extended trot. Challenge ahead. He tends to spook a lot and be pretty crazy in the outdoor arena because he can see and hear so many things at the same time going on.

Thomas helped me with his horse Flirt and we went in the evening when most of the day´s work was already done. The general outcome of the session was good, we ended with a nice and relaxed and sufficiently sweaty horse. He did spook and buck quite a few times though, most of the time really out of the blue without any visible reason.

The good news is that he allowed me more and more to help him out of it and that we could continue the trotting work right after every spook.

The next day we did the same thing, he was very good. Relaxed and started to lower his neck and move in a nice frame more and more. I actually managed to get some communication going about that without him feeling restricted or trapped.

Then on Saturday, we chose a bad time for the riding. The girls were returning from the morning work, mules driving by, horses moving. I had been pretty confident after the session of the day before, but it was too much for his (and my) emotional fitness.

I decided to unmount and work him on the ground instead. He was full of energy! I asked him to trot fast but not canter on a very long rope – this seemed to channel his energy nicely while still engaging his brain enough to not zoom out completely.

Sunday was very good again. He was relaxed and only spooked one single time – the bushes must have bitten in his legs. I had good and consistent communication about working properly in a frame.

One big improvement I noticed since the treatment is that he suddenly canters nicely and without emotion on the ground. Hopefully, we are heading in the right direction. It would be so nice if he could work pain-free.

Next week Berni Zambail will come for a course – I will ask him for advice on this special horse, Zayin.