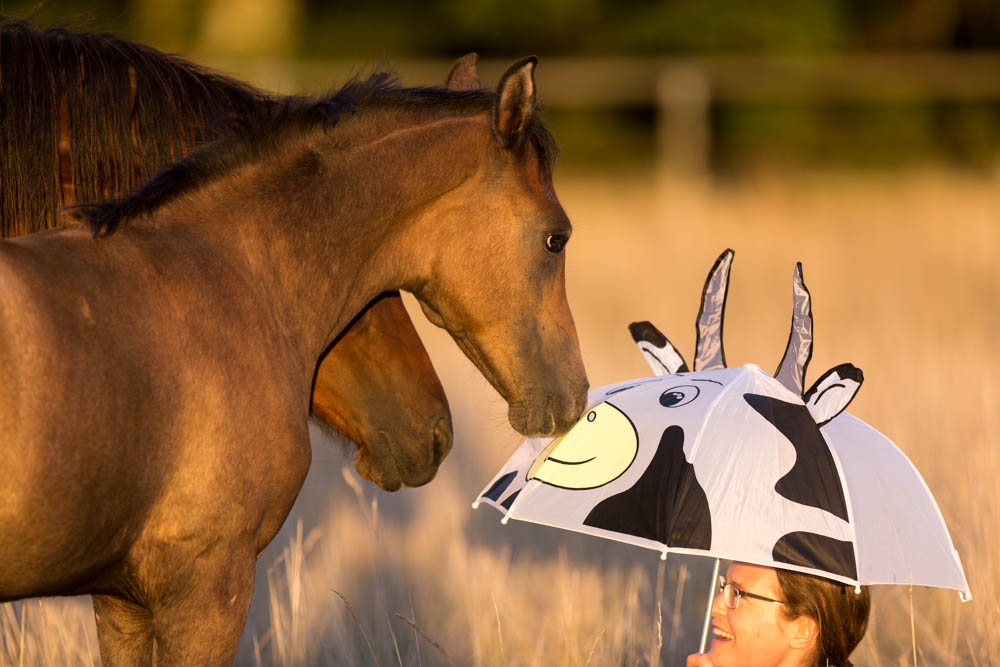 Imagine a nice sunny day, the birds are singing, and you are on one of the first trail rides with the horse you have had since he is a baby. A dream come true! The big question is: how will he handle all the new things? The strange noises, the monsters in the bushes and the horse-eating purple man behind that trunk? Will he be spooky or will he be brave and trust you?

In fact, you can influence the level of reactivity and ability to deal with spooks of your horse-the earlier you start with it, the better.

Yes, character and temperament are strongly inheritable traits, but you can have a big influence on them especially at foal age. For sure, you cannot turn a hot Arabian into a quiet Haflinger, but you can work on his ability to deal with new and scary objects. 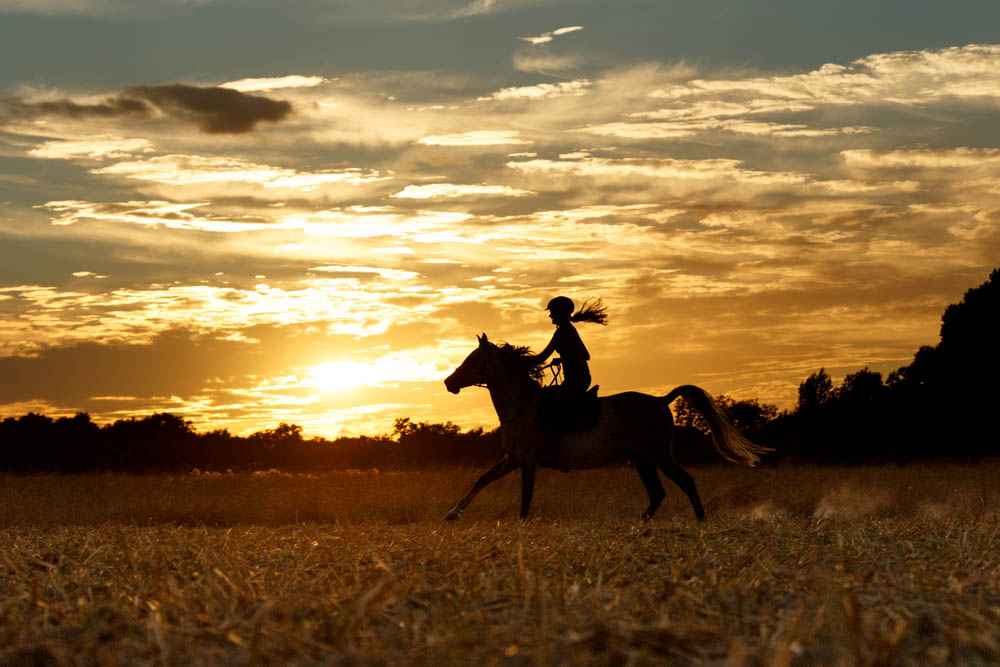 My two youngsters Tara, born 2016, and Maserati, born 2017, are both sensitive and reactive types. They are Shagya - Arabians, so it doesn’t come as a surprise to me to have horses who are high in blood. I enjoy long fast trail rides and nothing is worse than riding a horse that spooks of every blue flower and big leaf.

So I decided to take steps from early on for both of them. With Tara I started as soon as she came to me as a weanling at 7 months old. Maserati is the foal of my mare Mazirah so I could start right at the beginning. I wanted them to become braver and more curious about new and strange things.

The First Step—Learning by Observation

Your foal can learn loads by simply observing and imitating his mother and later also other herd members. What horse owners already have known for a long time is now scientifically proven:

When you show scary objects to the dam and allow the foal to watch, the foal will react less stressed or scared to them in the future.

The study showed, that the foals not only got used to those objects they had seen their mother deal with, but the general confidence and acceptance for scary objects was much higher than in other foals the same age.

Of course, this only works if the dam handles the objects without fear. 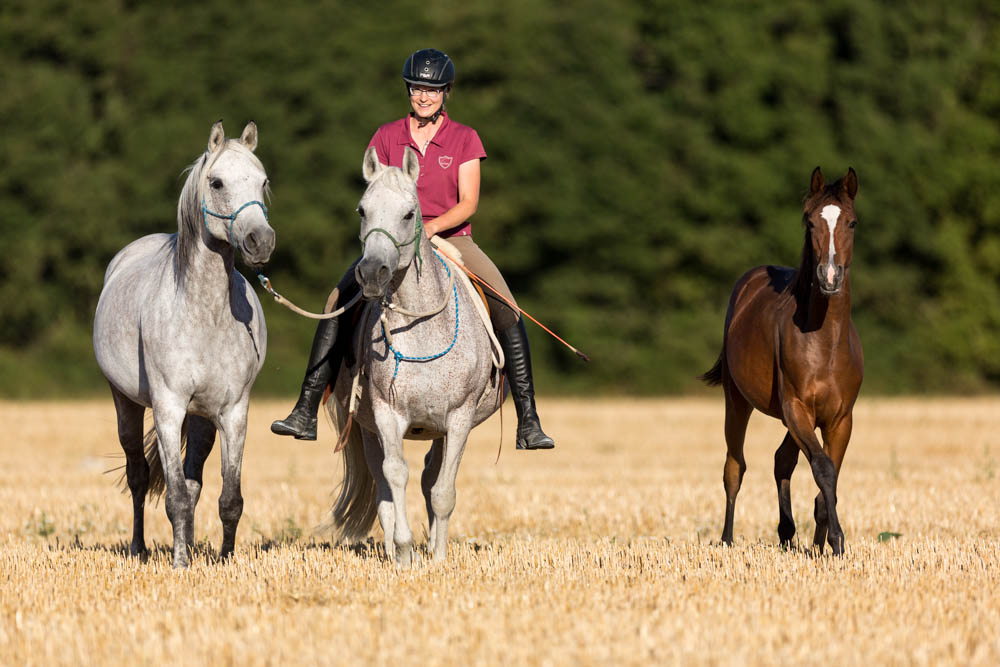 When I got Tara, Mazirah adopted her. Tara would follow her everywhere. I took advantage of that and took her with us in the arena. She would observe Mazirah load into the trailer, cross the bridge, jump the blue barrels and even follow her when circling.

I took Tara to come with us on trail rides. We have a huge forest and big fields with no roads or other dangerous things, so I could take her without danger. She met her first deer, jumped her first logs and of course also had a few big races over our big fields. When Tara was older, she was as a result very easygoing and brave with all the things I taught her. 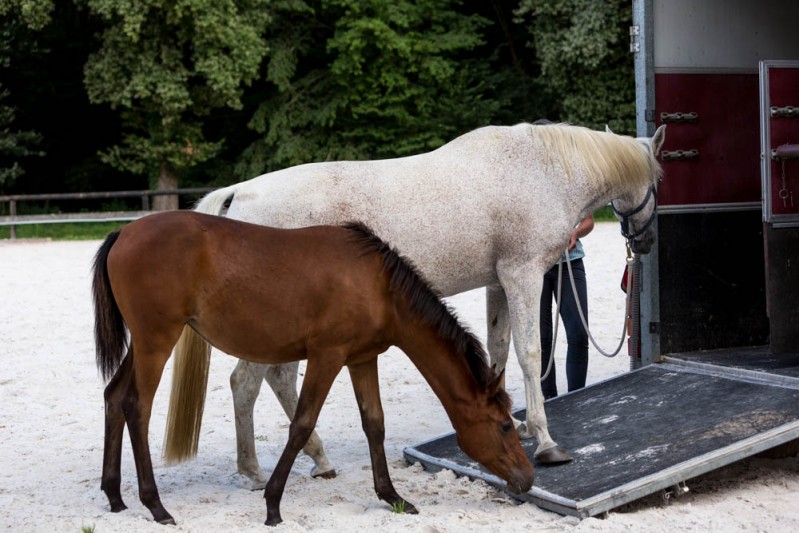 Tara is curiously watching how Mazirah loads into the trailer.

Walking over the bridge - just observing, not brave enough yet to do the same.

Tara synchronised perfectly with Mazirah when I circled her at the trot.

Tara loved our trail rides we had together as a "family".

During Maseratis first month of life, I exposed him to as many different things as I could. He crossed water puddles, met ducks and found a red flag to be very interesting.

Later on, I took him on walks in hand together with his mom. He didn’t follow as well as Tara, so I could not allow him at Liberty. Taking a foal on walks together with a brave and trusted horse is a great way to let them learn by observation. Maserati watched Mazirah play with water, he learnt that logs are not a hiding place of tigers and even followed her into the trailer! 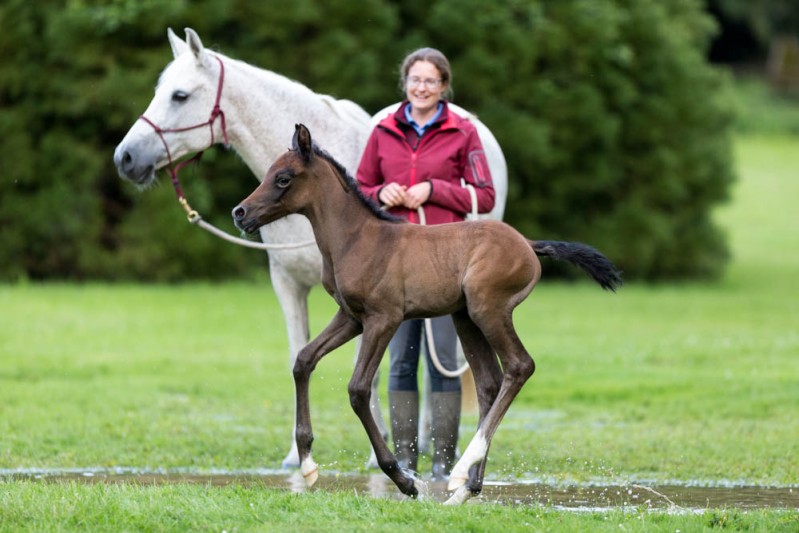 Cantering through the puddle is lots of fun!

He meets the first duck in his life - and discovers that it is fun to chase it!

2 weeks old - he had just seen his mother play with the flag. Can't be scary then...

5 months old - first time ever that he saw a trailer.

Watching Mazirah splashing in the water - a bit sceptical, but curious

The Second Step—Learning by Imitation

Make sure the mother is well socialized or, if your foal is already weaned, find a really cool “good-uncle” horse to be a good example.

When Maserati was five months old, I took the big scary tarp and a wooden bridge into his field. I wanted him to learn by imitation and observation of his mother, his older sister Mayana and Tara, his yearling sister. It was very interesting to observe. They showed Maserati that both things are really fun to play with

Approach and Retreat With the Tarp

It was very intriguing to see his natural way of dealing with the new objects. He didn’t trust his herd mates right away, at first he stayed a bit behind them and observed the scene.

Mayana and Tara almost tore the tarp into pieces, having a blast with it. A few times Maserati had to run away, retreat to a safe distance, hiding behind his Mom. But curiosity always brought him right back and he slowly started to imitate his sisters. 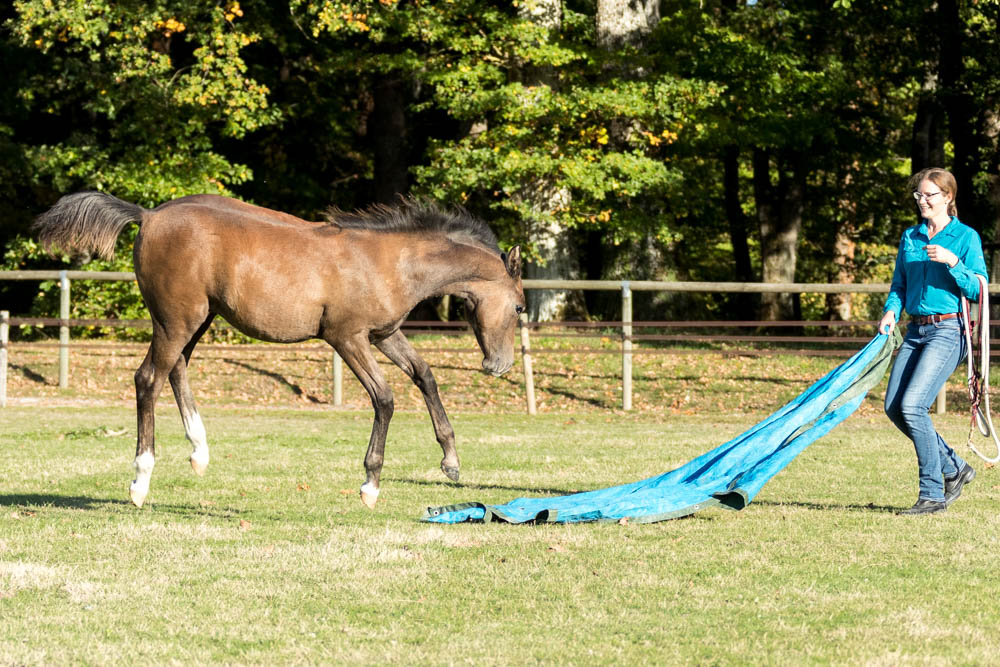 It was a prime example of how horses naturally retreat and then re-approach from things they think might be dangerous. On the first day, he was brave enough to put his front feet on the tarp and bite into it. But as soon as one of the other horses was too noisy with the tarp, he had to run off.

I returned two days later and he was instantly way more confident. It seemed that he had decided the last time that it was a fun game after all. He only needed to run off once in the very beginning, coming right back. Very quickly he started to play with the tarp enthusiastic, doing the same as his sisters. I was even able to rub him with the tarp on his back.

In the end, I dragged the tarp behind me (retreat) and he followed (approach) with big exuberant bucks stopping the tarp by stepping on it. What a fun game—he had gained so much confidence.

Enjoy how Maserati get to know the tarp 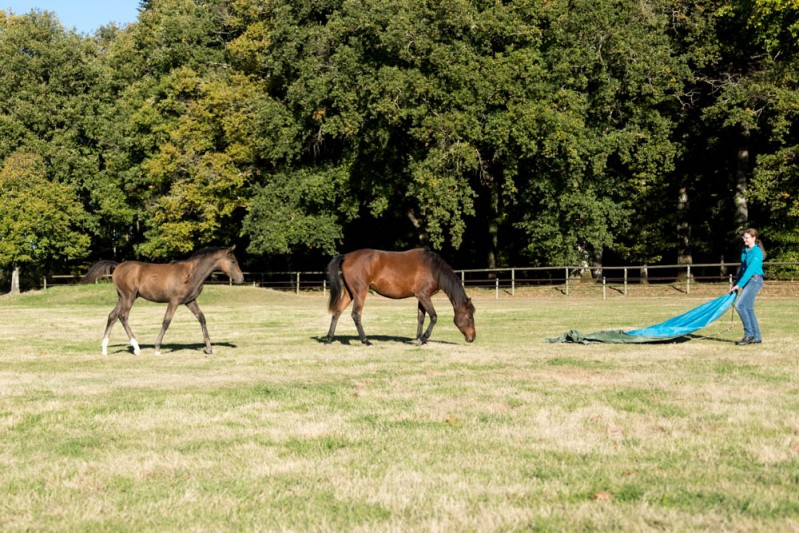 Tara, closely followed by Maserati, is first to check out the tarp - she already knows it!

Mother Mazirah came for help - she is the most trusted example for Maserati.

Tara was playing noisy, Maserati got afraid and went hiding behind me.

After a while, he did the same as Tara - first try of imitation

He got spooked by his own courage - it was noisy and followed him a bit when he tried to run off!

One lap around the field!

Curiosity brought him right back to the tarp, but he went hiding behind mum.

This was the first time that he got courageous enough to put one foot on the tarp.

Maserati is exactly doing the same as his sister Mayana is showing him.

Tara is making noise again. He looks a bit sceptical, but as Mayana doesn't care, he stays and watches.

Mayana and Maserati are really having fun with it now!

I started to drag the tarp behind me.

He followed with big exuberant bucks! The flying foal!

And stopped the tarp by stepping on it.

He got no longer scared by the crackling noise it made.

He readily accepted that I rub him with the tarp on the back.

What about wrapping into it?

Shake the whole thing! Let`s make as much noise as possible!

Maserati has defenitely decided that the tarp was not scary at all, but lot`s of fun to play with!

Stepping on different surfaces can be difficult for some horses. It seemed that the experience with the tarp had made Maserati already more confident about himself and about the objects I present. The bridge was no big deal for him at all. Mayana, Mazirah and Tara love to step on things. They all came one after the other to check out the strange thing in their field.

After some digging, pawing and scraping, they soon all stood on it. Again, Maserati carefully observed what was happening, then did the same scraping and pawing and very soon put his feet on it as well.

The whole family has fun with the bridge 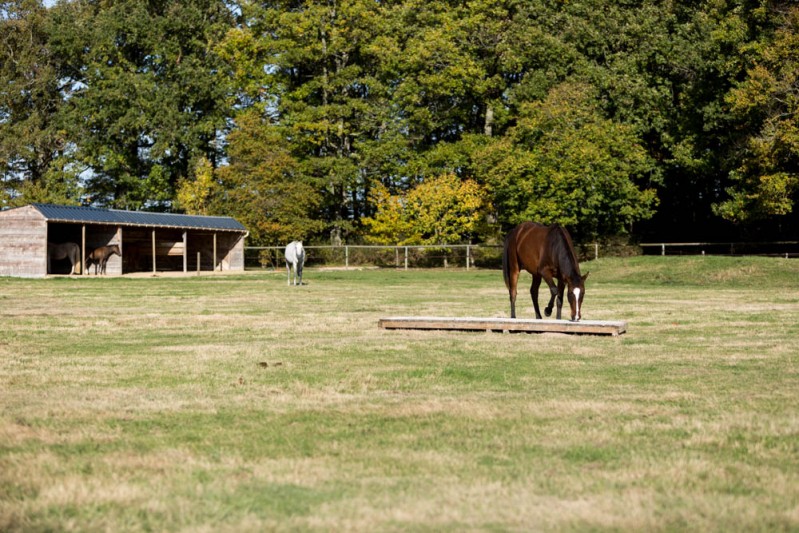 Tara is again the first to check out the Bridge.

What are you doing, Tara? What is this thing?

Tara is scraping and pawing, Maserati observes her closely.

And quickly starts to imitate her.

Sister Mayana and mother Mazirah come to help. "Look, my son, this thing is ok." Mazirah seems to say.

Maserati quickly trusted his good examples, and did the same.

What can possibly go wrong when mum is watching!

Tara wants to join for the picture.

He can even just put his hind feet on the bridge!

Tara and Maserati learnt so effortlessly with the help of their family. It would have been more stressful for them without their help. Allow your foal to learn by observation and imitation, it will make learning very easy, non-confrontational and natural for him.

Go and bring all kinds of stuff into the field of your foal: an umbrella, a big gymnastic ball, balloons, a plastic tarp, music or something that makes noise. Get creative. The more your youngster gets to see and explore now, the more relaxed and level-headed he will be later!

It is about increasing confidence, not desensitization!

Remember that this is going to improve your young horses total level of confidence. Not just towards specific objects or situations. He will turn out to be more confident and less spooky in general. He will learn that whatever strange object or situation you present, it will be OK - maybe even fun!