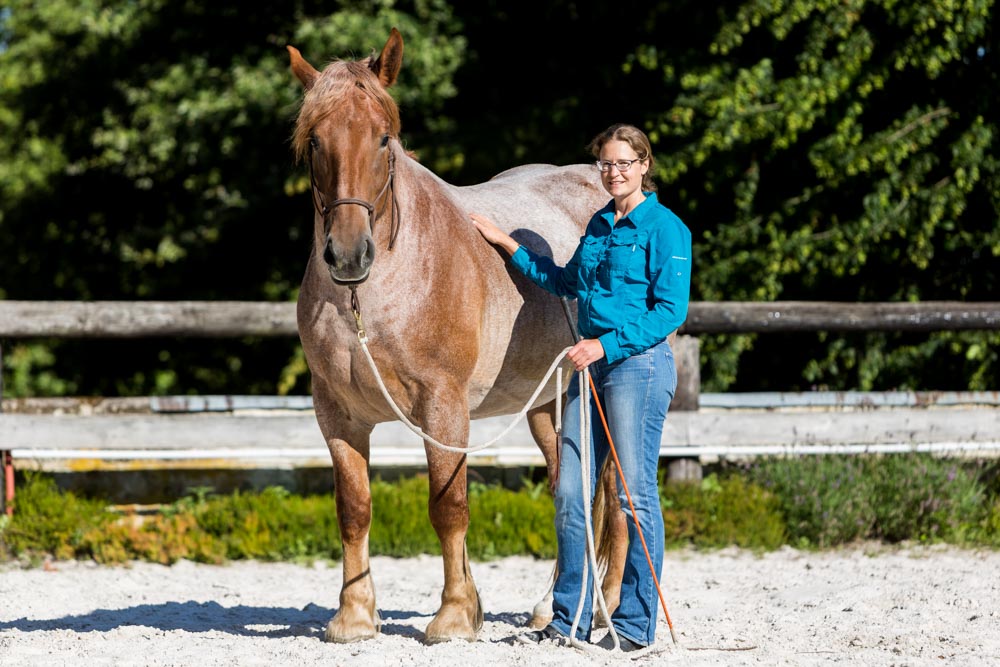 Chevrenne came to me for a 3-week stay in July to be started under saddle. I have so far never had a Draft Horse to ride and work with, so this is the first time that I have the pleasure to play with 850 kg at once! And I have to say, what a different experience in comparison to a 450 kg horse.

Chevrenne’s owner already did a great job with the basic handling of the mare, she already taught her to work on long reins and to work the ground (pull a plough). Chevrenne already knew the cinch, the bridle and some basic voice commands. What she was still lacking though was respect and watching out for the human, impulsion and responsiveness.

Watch out for the human

It is interesting how much more important little things like giving feet politely suddenly become once the animal has 850 kg and consequences of lack of attention or cooperation are so much more severe. Don’t get me wrong, Chevrenne is a very gentle and good natured mare, she never intended anything bad. She was simply not paying attention and not considering that things could be more fragile than her.

Everything that has something to do with safety and cooperating as a partner in daily life suddenly became a whole different meaning with her. I had to teach her to watch out for the human and act like a partner in every single little thing: giving feet and not getting distracted or losing balance, entering a box without squashing me against the post, passing gates without walking over me or crushing the gates,  walking to the paddock and paying attention to her big feet so she wouldn’t walk on my little ones.

During the first week, I mainly spent the time to brush up Chevrenne’s basic ground skills and attention towards the human. As her physical sensitivity is very low (these breeds are made to push into pressure) I used the plastic flag in order to get her be more responsive to my requests.

She was easy to teach and attentive once I had her attention, but when she was distracted by something, she would just walk over whatever was in her way, like poles or obstacle blocks. She just didn’t mind the discomfort it caused her. In the end of the first week, she had her first ride. She learnt to position herself to the mounting block and to accept me on her back. It was really not a big deal for her.

The second week I went with her a lot in the round pen in order to work on better impulsion on the long rope. I can easily hold and block a lighter horse that starts to pull on the rope but with her, I knew I just simply had to prevent this situation.

I really didn’t want her to make the experience that she was able to pull away.  I worked on her understanding to trot on a circle and to do responsive upwards transitions. That she already knew voice commands facilitated the task a lot. Some trouble came up when I asked her to canter.

Now it is important to understand that draft horses are not made to canter, but rather to walk powerfully. So it is hard for them to do it. All I wanted to see was that Chevrenne tries and shows a good and willing attitude instead of bucking and kicking.

So each time I saw her trying, even just accelerating the trot, I praised her. Very soon she picked up the canter pretty easily for a horse of her size and build. I started to ride her in the round pen at walk and trot, stopping and backing up as well as easy turns. She was very quick to understand, even just in the rope halter.

I did still prefer to do those first sessions at the trot in the round pen, because I knew that I hadn’t much influence on the halter in case she had a spook or a happy attack – and I hate it to have to control a horse with the bit because I didn’t set up the situation for success. I like to create understanding and a strong mental connection which in the end will give me way more control than any bridle could.

From groundwork to trail ride- Chevrenne's Colt Starting in pictures: 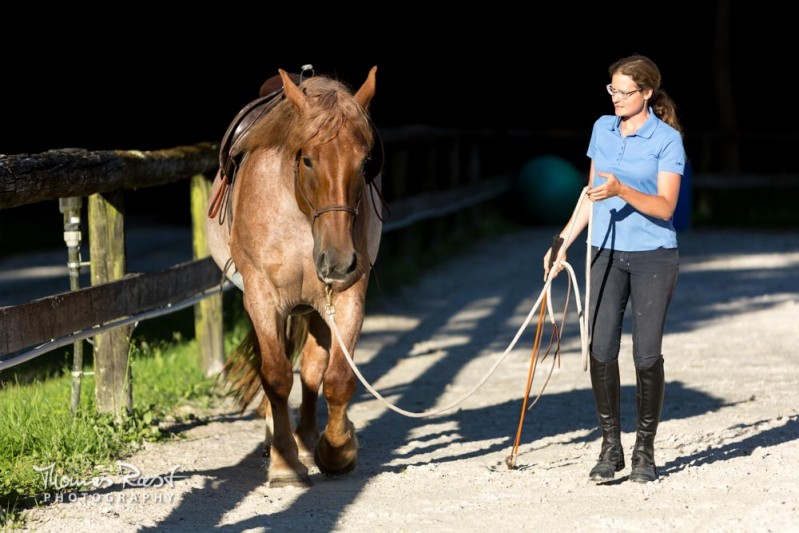 Leading from a Distance - Chevrenne is learning to keep some distance and to not push on me for whatever reason.

Stopping and backing up - she is learning to pay close attention

Backing up with rhythmic pressure and with respect - a key exercise with her. When something caught her attention or she got excited, her first reaction was mostly to start walking no matter what.

Yield the shoulders - also for more respect and easier manouverability.

Chevrenne gave some little bucks when I asked her to go forward with impulsion :-)

Yes she can! After lots of praise and persistent insisting she gave me some nice and willing cater departures!

Coming to the mounting block - here she is still with the halter, it is her 5. ride and the first time out of the round pen in our big out door arena.

This big girl was just so comfortable!

Chevrenne didn't pay much attention to whatever was in front of her feet. She would just knock it all over. So I practised a lot with her to trot over and around stuff to teach her to watch her feet more.

I am small and she is big - I need her to think with me and do her part of the job, otherwise I won't be safe. It took a while until I felt like trusting her like this. She lost balance and attention quite often, leaning and almost falling on the leg I had lifted

Coming to the mounting block on ride number 8. Chevrenne really got the point and always tried to come as close as possible! What a good girl!

Soft lateral flexion also with the bit. Pulling on two reins in case of emergency will usually have little effect on strong horses like this - using one rein only will take their power away and gives them nothing to push agains.

8. Ride and Chevrenne found the real forward trot in the arena! She really always tried hard to do her best.

8. Ride and first Trail Ride and on top alone! This big girl is just super cool.

Chevrenne's owner Daniele came for 2 hand-over sessions. I explained to her all important things and how to continue

For example: Passing gaits with safety and asking the horse to act like a partner.

First ride for the two of them! I think someone is very happy!

And of cours I took her on a trail ride out in the fields and the forest of Le Plessis to experience how relaxed and connected Chevrenne is out on the trail.

Moving forward - motivation is the key

In the third week, I started to ride her in the big outdoor arena and I introduced the bit – which she of course already knew from working farm tools. Chevrenne’s biggest issue was to start thinking forward more. She simply had to discover that trotting with a human on board was nice.

At first I just asked her lots and lots of transitions until they got responsive – and of course, notice every effort she did and praise her for it. Soon I could start to focus on maintaining the trot and give the reward once I felt her thinking of trotting and coming into a flow of movement.

I really believe that if we manage to communicate to our horses what we expect of them and that we are happy about them when they do it, they start to like their job. Motivation is key for horses like her. You can’t force an 850 kg muscle pack to do anything – ask, explain and motivate. Every ride was very short – max of 20 minutes in total. I like to keep it short, interesting and progressive. Quit when the horse understood and did its biggest effort.

As the third week was also the last week of her stay, I started to take her on trail rides. She was just so great! It had a truly relaxing and calming effect on me – Chevrenne’s calm and steady rhythm at the walk was simply tranquillizing. There on these trail rides she also found her impulsion at the trot.

She found a wonderful forward trot, without that I ever had the feeling that she would take of or buck. She was just great. So when the owner came during the last two days to have a lesson and to ride Chevrenne herself, I was very happy to show her what a cool horse she had.

The importance of basic skills

Chevrenne gave me good reminder how important it is to teach a horse good basic skills and to act like a partner in daily life. We tend to be pretty forgiving and if the horse is not that tall or heavy, we get away with it.

We put up with the little bit of leaning or pulling on us when we pick up a hoof, or the little push they give us when they try to avoid a puddle. All horses should learn to act like real partners in daily life and do their share in making the life together safe and nice.