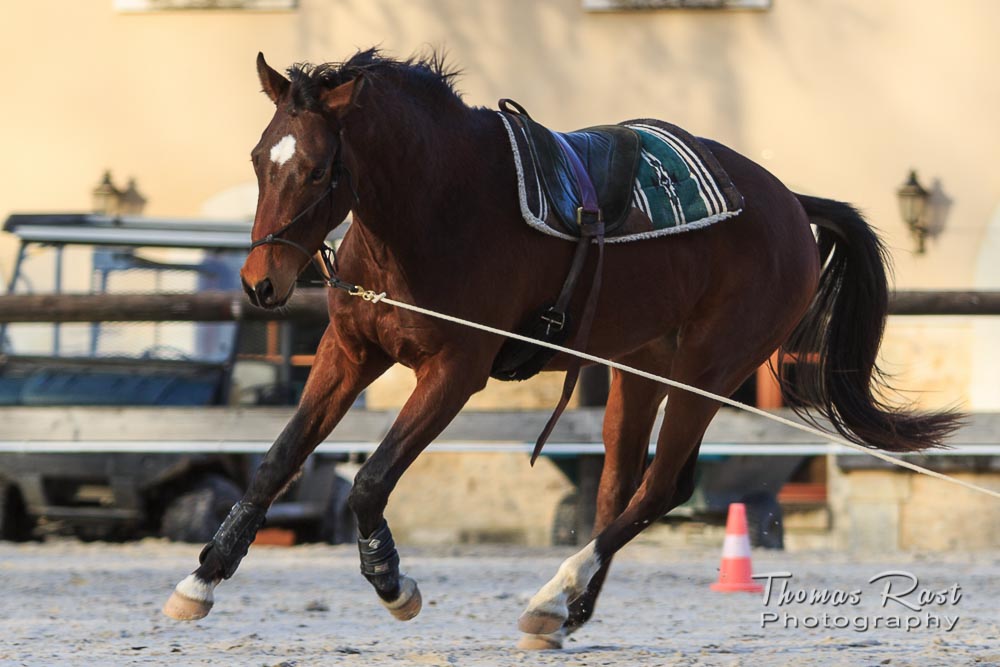 Tadjik is really settling down in the new environment, becoming very playful and funny. This week we played a lot with cavalettis and he got his first introduction to jumping gymnastics.

Tadjik had 4 sessions this week. As he is just turning 3, I pay attention to not overwork him and give him rest days in regular intervals. 2 days of work and 1 day of rest seems to work well for him. Of course he still gets to move on his rest day, either by being allowed at liberty in the arena or by going in the field with Zayin. Anyway he has a big paddock in front of his box to go in and out the way he wants to.

Tadjik is a lot of fun to play with.

Everything comes so easy to him, it is so normal to him to be connected to the person on the end of the rope. I keep his sessions very light hearted, pepper in physical work here and there to avoid him feeling pressed into too much discipline. In the beginning of each session I try to install a habit of walking calmly and with good activity before trotting around. As he has so much playdrive, this was a bit difficult for him at first – but when he gets it, it creates a beautiful calmness in him.

During our sessions I focus on how well he gives me forward energy and how well he allows me to direct his nose and feet. He likes to canter a lot out of himself, but sometimes when I ask him to, he just swishes the tail and give rather sluggish answers. So there is some work to do. Same with the changes of direction. He does them ok, but not with a “yes madam” attitude. If I think of riding him later, I can already imagine that he would resist a bit to cantering and argue about stirring. So my goal is to have both things really well working before riding him.

Pictures of the second week! 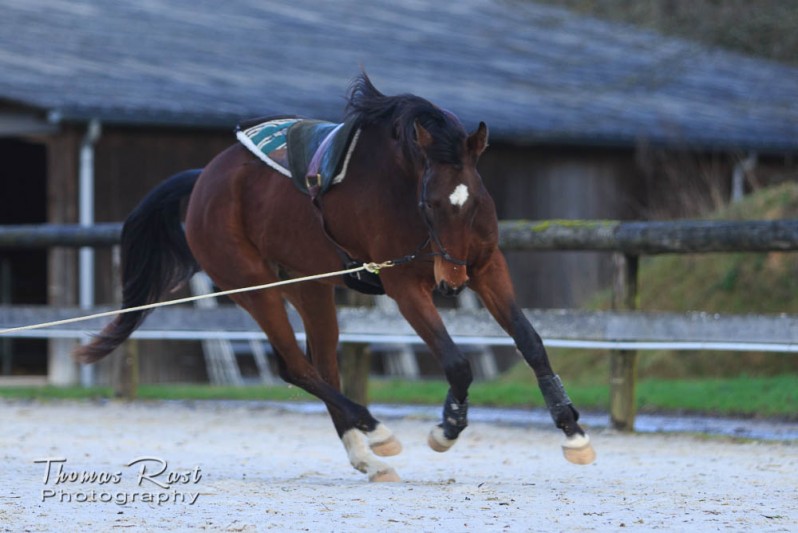 Tadjik had lots of Energy on this day, he had a day off before.

He is so lovely to watch at the canter, his balance is just great for a 3 year old.

After this good warm up, it is time for some cavaletti work. First approach - some difficulty sorting the legs

Some more experimenting on how it is done - the spider leg technique!

Lets drop the neck to see where to put the feet - still spider legs!

Oh yes! round like a ball, thats good work for the back!

Everyday he gets to wear the bridle, just to get him used to wearing it

I started to explain to him the meaning of the inside leg - of course from the ground. He is learning to bend.

And as well to the other side.

He is not as experienced yet as Zayin and sometimes has to sort his feet in a funny way during the first go. He looks like as if he has spider legs. His natural athletism is fascinating to watch, he moves so nicely over the back, reaching his hind legs under and allowing the energy to travel all over his back and neck. In his trot work I focus on him maintaining a good rhythm, active but with enough relaxation in his body, with the neck stretched forward down. In the very beginning he is allowed to stretch all the way to the ground, but later on I ask him to keep his nose at the height of his shoulder joint. This keeps him more balanced and activates the muscles of his neck and back better.

...where I started to introduce him to gymnastic jumping rows. I started with a 50 cm jump and a rhythm pole in front. First step was to establish that he would go over it with straightness, good rhythm and keep cantering after it. He managed that after 2 tries so I built the jump higher to 80 cm. This was as well pretty easy for him and well in his range of abilities. His style is still pretty funny – sometimes he jumped like a frog. It was amazing to see a horse with so much natural talent, he always managed to sort his feet, even if he miscalculated his distance. We ended the session with a brilliant jump where he approached and landed in the correct canter, got the distance perfectly right and jumped with good technique and bascule. What a nice horse!

Have fun with the work, agree with me and develop physically to be prepared for riding